The stunning new METZ video for Blind Youth Industrial Park, the latest track from ‘Atlas Vending’, the band’s soon-to-be-released new album, is out now. The beautifully dystopian video depicts a woman dragging an injured companion on a stretcher through an alien landscape as the pair are tracked by a squad of armed soldiers, and provides sharp contrast to the song, which is an ode to the naivety of youth and the freedom of being unburdened by the world around you.

Shot in Queenstown, on the South Island of New Zealand, Blind Youth Industrial Park was directed by Dylan Pharazyn. Here’s Pharazyn on his inspiration for the video: “I started thinking of the feeling of war or samurai films, beautiful but dark and violent… but then I had this idea to work up a more unique world… I started to think of a more futuristic setting — more unusual and dream-like with the story set on a distant planet where there is future technology and some kind of alien magic… like a futuristic fable. I loved the idea of the hero Ayeth on this nomadic walk through an epic landscape… I loved the strength in her and the pairing of her with a wounded companion, something really human and vulnerable… I wanted that emotive warmth countering the cold military images.”

Known for their unrivalled, high energy live shows and relentless touring, the band has felt a huge void with the loss of live music this year. In the hopes of capturing some of that inimitable spirit and connection, today METZ are also announcing that they will perform ‘Atlas Vending’, in its entirety, live from The Opera House in Toronto. These live streams will air in North & South America at 6 pm PT/9 pm ET on October 15th, and on Oct 17th at 8pm BST/9pm CEST/8pm AEST for those in the UK, Europe, Australia, New Zealand, and Asia. Frontman Alex Edkins shares that “Something that is intrinsic to who we are as people has been taken away. We want, so badly, to find that feeling again, to forget the world for a moment, and share a brand new album that we love very much (plus some oldies) with you. To all the people of the world who have come to our shows to dance, sweat, and scream, we hope you can join us once again with this show.” You can purchase tickets and ticket bundles with LPs and merch for these shows by clicking here. 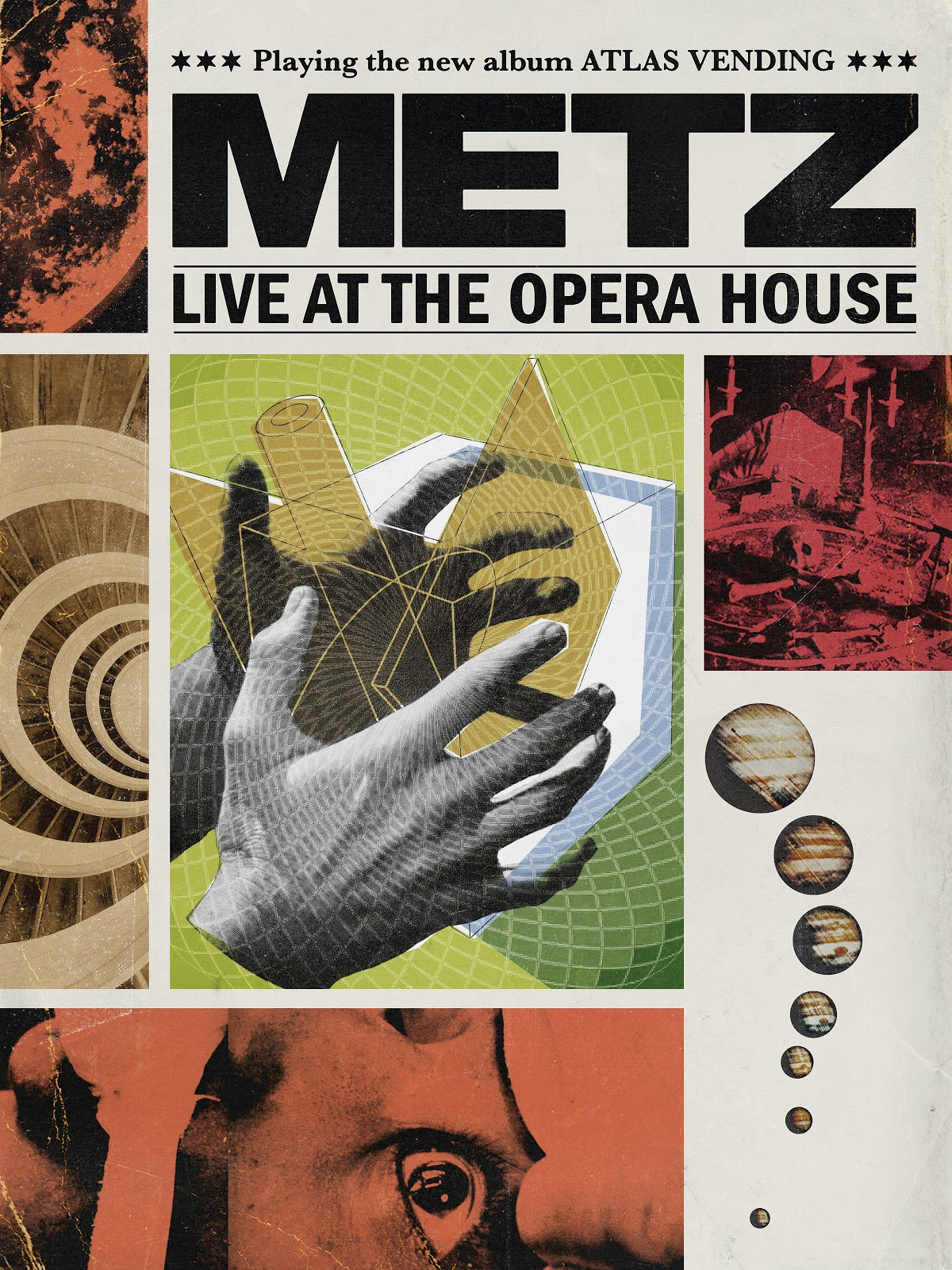 ‘Atlas Vending’, the band’s most dynamic, dimensional, and compelling work of their career, will be released on October 9th on Sub Pop. Bolstered by the co-production of Ben Greenberg (Uniform) and the engineering and mixing skills of Seth Manchester (Daughters, Lingua Ignota, The Body) at Machines with Magnets in Pawtucket, Rhode Island, the band’s fourth full-length album, sounds massive, articulate, and earnest.

“Change is inevitable if you’re lucky,” says guitarist/vocalist Alex Edkins while talking about ‘Atlas Vending’, the fourth full-length album by Toronto’s METZ. “Our goal is to remain in flux, to grow in a natural and gradual way. We’ve always been wary to not overthink or intellectualise the music we love but also not satisfied until we’ve accomplished something that pushes us forward.” The music made by Edkins and his compatriots Hayden Menzies (drums) and Chris Slorach (bass) has always been a little difficult to pin down. Their earliest recordings contained nods to the teeming energy of early ‘90s DIY hardcore, the aggravated angularities of This Heat, and the noisy riffing of AmRep’s quintessential guitar manglers, but there was never a moment where METZ sounded like they were paying tribute to the heroes of their youth. If anything, the sonic trajectory of their albums captured the journey of a band shedding influences and digging deeper into their fundamental core—steady propulsive drums, chest-thumping bass lines, bloody-fingered guitar riffs, the howling angst of our fading innocence. With ‘Atlas Vending’, METZ not only continue to push their music into new territories of dynamics, crooked melodies, and sweat-drenched rhythms, they explore the theme of growing up and maturing within a format typically suspended in youth.

Covering seemingly disparate themes such as paternity, crushing social anxiety, addiction, isolation, media-induced paranoia, and the restless urge to leave everything behind, each of ‘Atlas Vending’’s ten songs offers a snapshot of today’s modern condition and together form a musical and narrative whole. Album opener Pulse is a completely unnerving exercise in reductionist tension, with verses providing little more than a lone discordant chord, a hammering kick drum, and the occasional punctuation of a diving bass note. From there METZ launch into Blind Youth Industrial Park, an absolute scorcher of paranoid dissonance and malicious force centred on a chromatic descending riff and a merciless four-to-the-floor drum battery.

The album hits its stride with No Ceiling – a minute-and-a-half rager that comes about as close to containing a pop hook as anything METZ has ever written. Though it’s still saturated with in-the-red distortion, this truncated anthem about discovering love and purpose provides the rare counterpoint to the band’s grievous compositions. But there’s no yielding to complacency on ‘Atlas Vending’, and the mercurial nature of love and romance is expertly captured in the alternately brutal verses and beguiling choruses of Hail Taxi. If METZ’s current mission is to mirror the inevitable struggles of adulthood, they’ve successfully managed to tap into the conflicted relationship between rebellion and revelry with the song’s tactics of offsetting their signature bombast with anthemic melodic resolutions.

The song sequencing follows a cradle-to-grave trajectory, spanning from primitive origins through increasingly nuanced and turbulent peaks and valleys all the way to the climactic closer, A Boat to Drown In. The lyrics speak to this arc as well, with the songs addressing life’s struggles all the way through to death, as Edkins snarls “crashed through the pearly gates and opened up my eyes, I can see it now” before the band launches into the album’s cascading outro.

While past METZ albums thrived on an abrasive relentlessness, the trio embarked on ‘Atlas Vending’ with the goal to make a more patient and honest record – something that invited repeated listens rather than a few exhilarating bludgeonings. It’s as if the band realised they were in it for the long haul, and their music could serve as a constant as they navigated life’s trials and tribulations. The result is a record that sounds massive, articulate, and earnest. Bolstered by the co-production of Ben Greenberg (Uniform) and the engineering and mixing skills of Seth Manchester (Daughters, Lingua Ignota, The Body) at Machines with Magnets in Pawtucket, Rhode Island, METZ deliver the most dynamic, dimensional, and compelling work of their career.

Preorders of ‘Atlas Vending’ are now available from Sub Pop. LP preorders through megamart.subpop.com, METZ’s merch store and select independent retailers in North America will receive the limited Loser Edition on pearlescent grey and silver vinyl. Vinyl preorders in the UK and Europe from select independent retailers will receive the Loser Edition on light rose coloured vinyl. A new t-shirt design will be available as well. And in Canada, Atlas Vending will be available from Royal Mountain Records.

Thanks to Brace Yourself PR